He does not call the equipped...

He equips the called. We hear this a lot in our circle. I'm frustrated and here is why. I feel ill-equipped I don't feel like I have the necessary tools to raise Sammy some days. It's my pity party and I will cry if I want to. But I am humbly reminded in these moments the problem is not with Sammy. He is perfect and in God's eyes just as he should be. the issue lies solely in my lap. I don't know what I am doing
I hear this and remember, he does not call the equipped. Obviously he called me. In a loud and earth shaking voice. It scares me to be trusted with such a monumental task. He is amazing and I am blessed. My help comes from the Lord. I cannot do it on my own. So I humbly beg you Lord to watch over me and help me find the strength to carry my cross. you have trusted me with something that not everyone is trusted with. I don't want to let you down. Help me praise you Lord, in my own personal storm

Posted by Annemarie at 2:11 PM
He does not call the equipped...
2010-05-13T14:11:00-04:00
Annemarie
autism|
Comments
Email ThisBlogThis!Share to TwitterShare to FacebookShare to Pinterest
Labels: autism

got the fever for the flavor of a pringle 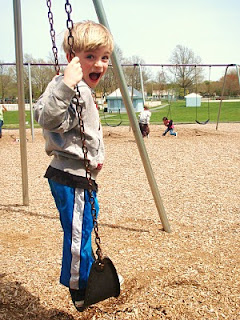 Sam with a fever on Monday of 103 was more coherent than any other time in his life. you see when Sammy does not have a fever he is like a pringles chip. They taste good, come in different flavors, aren't as bad for you as other chips because they have less extra grease and fat. They are light and airy and come in a can. When he has a fever he is much more like a regular chip. real honest to goodness potato chips aren't formed all into the same shape, they taste even better even if they aren't as good for you. They come in a bag which makes you feel like you somehow got more even if you didn't.
stay with me here
When he isn't sick, he is a pringles chip. he sounds the same and acts the same. his words have been given to him and rarely do you get something you have never heard before. Everything revolves around star wars Jedi and spider man , its really all just one formed chip. Granted being healthy and not having a fever is the preferred option, what fever seems to do to his brain is amazing. His conversation healthy is light and airy and sticks to the surface. He still only holds 2 conversation vollies.
But with fever he talks about everything , he becomes real...3-d. he sings songs without prompting, tells me what he likes and wants. smiles and even held a 9 volley conversation. he talked about the sky and the sun. He asked where clouds came from and then understood the answer. Before anyone jumps on me for the "real" comment please understand I am not saying he isn't a real kid otherwise, he is. It's just the difference between flat Stanley and Muppet's 3-d.
I love him more than anything and I obviously want him healthy but I do wish I could keep those pieces of him closer.
Posted by Annemarie at 4:49 PM
got the fever for the flavor of a pringle
2010-05-12T16:49:00-04:00
Annemarie
autism|
Comments
Email ThisBlogThis!Share to TwitterShare to FacebookShare to Pinterest
Labels: autism

the joys of life 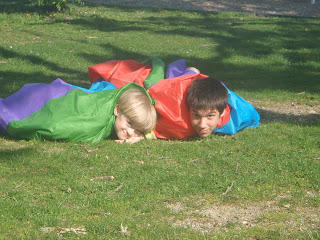 Posted by Annemarie at 10:09 AM
the joys of life
2010-05-04T10:09:00-04:00
Annemarie
autism|
Comments
Email ThisBlogThis!Share to TwitterShare to FacebookShare to Pinterest
Labels: autism 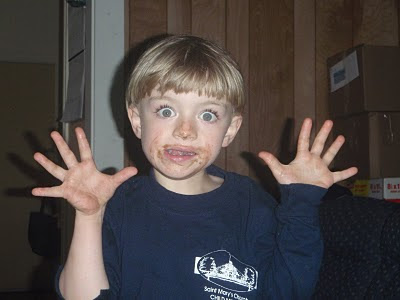 Let me start by saying boys are gross. little boys eat sleep and breath boogers, dirt and all sorts of other nasty things. in fact I mean that both literally and figuratively.So this post is gross...sorry
Mornings here are a bit much with Sammy. He hates getting dressed and his new issue...boogers
yes boogers. He wakes up today at 6 am, informs us he peed his pants and then starts flipping out. 15 minutes later i have ascertained only that its something that is hard and stuck. 10 more minutes and i have now figured out that it's a booger stuck in his nose. Its hard and its making him craaaazy!
I help him (read=fail) to blow his nose. I of course do it wrong and yet again chaos ensues.
my husband at this point left the room so here is Sammy, naked (peed his pants) writhing and screaming on the bed beside me. I'm only 8 days post op today so I'm still sore and fragile.
Daniel did come and rescue me only to have Sammy then switch gears to watching TV during breakfast. Breakfast and videos are never an allowed thing. Sammy thinks for a minute and then tells me "that is just crap mommy total crap" Crap, i wonder where he got that from...lovely!
45 minutes later and Daniel is battling him over underpants and t shirts. Sammy is screaming about hating school and wanting to go in early, video games and television. The list is endless.
his bus will be here in about 15 minutes he is playing his DS and calm. thank God he wont need to be carried to the stop. I cant do it.
we did have one fantastic moment today. I slept in a tank top since it was so warm. At some point this morning Sammy says "You might want change you shirt mom" when I asked him why, his eyes got big and round and his face lit up as he smiled at me. His little hand was twitching as he quietly told me in a hushed giggling whisper "A'cuz my want tickly you!" Those windows into his thinking, those moments make the hours of crap and anger we dealt with today worth it.
Posted by Annemarie at 7:57 AM
the mornings
2010-05-04T07:57:00-04:00
Annemarie
autism|
Comments
Email ThisBlogThis!Share to TwitterShare to FacebookShare to Pinterest
Labels: autism
Newer Posts Older Posts Home
Subscribe to: Posts (Atom)

What do YOU want to read about?

Some of our Favorites

Some of my favorite places